India's 100 smart cities initiative is well-known and most of the focus has, as planned, been on the first six major metro areas on the list. Now, the recently formed Smart Cities Council India is taking steps to include Tier II and Tier III cities in the program. And with good reason: those smaller cities are becoming the country’s new economic growth centers.

A white paper prepared by the Smart Cities Council India and FIRST Infocentre, India's Top 20 Promising Cities, highlights the motivation behind the effort to include India’s smaller cities in the country's smart cities initiative:

"Today, it is evident that other than the six existing metros – Chennai, New Delhi, Kolkata, Mumbai, Hyderabad and Bengaluru – new economic centers of growth are emerging. It is equally evident that we need to shift focus to these smaller cities, to plan carefully before growth overruns them.

Indeed, Tier-II and Tier-III cities, once untapped assets, are now a part of the country’s growth race. Their progress will widen the market, help modernise rural India and contribute to the overall development of the country. As it stands, several promising cities could qualify for the next set of major metropolitan cities." 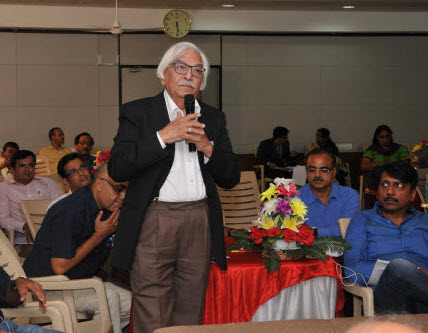 The first stop was at Ahmedabad, where the tour was conducted with Graduate School of Smart Studies, Gujarat Technological University (GTU). Case studies on GIFT City, Dholera and waste management and sanitation were presented with in-depth facts and figures. Speakers included representatives from IBM, AECOM, the U.S. Government, Godrej Properties, CRISIL, Saint Gobain and others. The inaugural session was presided by the Minister of Education while Vice Chancellor of GTU and RC Jha, CEO of GIFT City, were guests of honor.

Next stop: Hyderabad Aug. 22-23
While not all tour and seminar dates have been firmed up yet, Hyderabad will be the next location. Entitled National Conclave on Smart Technologies (NCST), the event will be held Aug. 22-23 and is expected to draw 1,200 delegates from 600 cities, including many of the municipal heads of 600 cities currently in the race to qualify for city funding under the smart cities mission & AMRUT program. The NCST will be attended by chief guest Union Minister of Urban Development Venkaiah Naidu, and guests of honor CM of Telangana, KC Rao and IT Minister of Telangana, KT Rama Rao. Speakers include Professor Carlo Ratti, Director, MIT Senseable City Laboratory; Vicente Guallart, Architect, Urban Habitat Lab IAAC Barcelona, and Anil Menon, President, Smart+Connected Communities at Cisco, among others. Those interested in participating can register at www.NCST.in. Companies that are members of the Smart Cities Council Global or Smart Cities Council India receive special discounts and benefits.

What will they be talking about?
In general, the tour programs will explore key trends, challenges, solutions and strategies in several areas, including:

On a more specific level effort would be made to pre-identify areas of reform as cited and articulated by city leaders and the seminar would attempt to offer solutions through vendors on those specific areas.

Who should attend?
In addition to scheduled presentations, the event also will provide an opportunity for networking and establishing contacts. For that reason, technology vendors and design professionals are encouraged to attend, in addition to mayors, municipal authorities, urban planners, urban development ministry officials, trade commissioners and other interested parties.

Since many candidate cities have no master plan or formal strategy for development, event sponsors encourage representatives from those communities to attend as well. Learn more and register >>